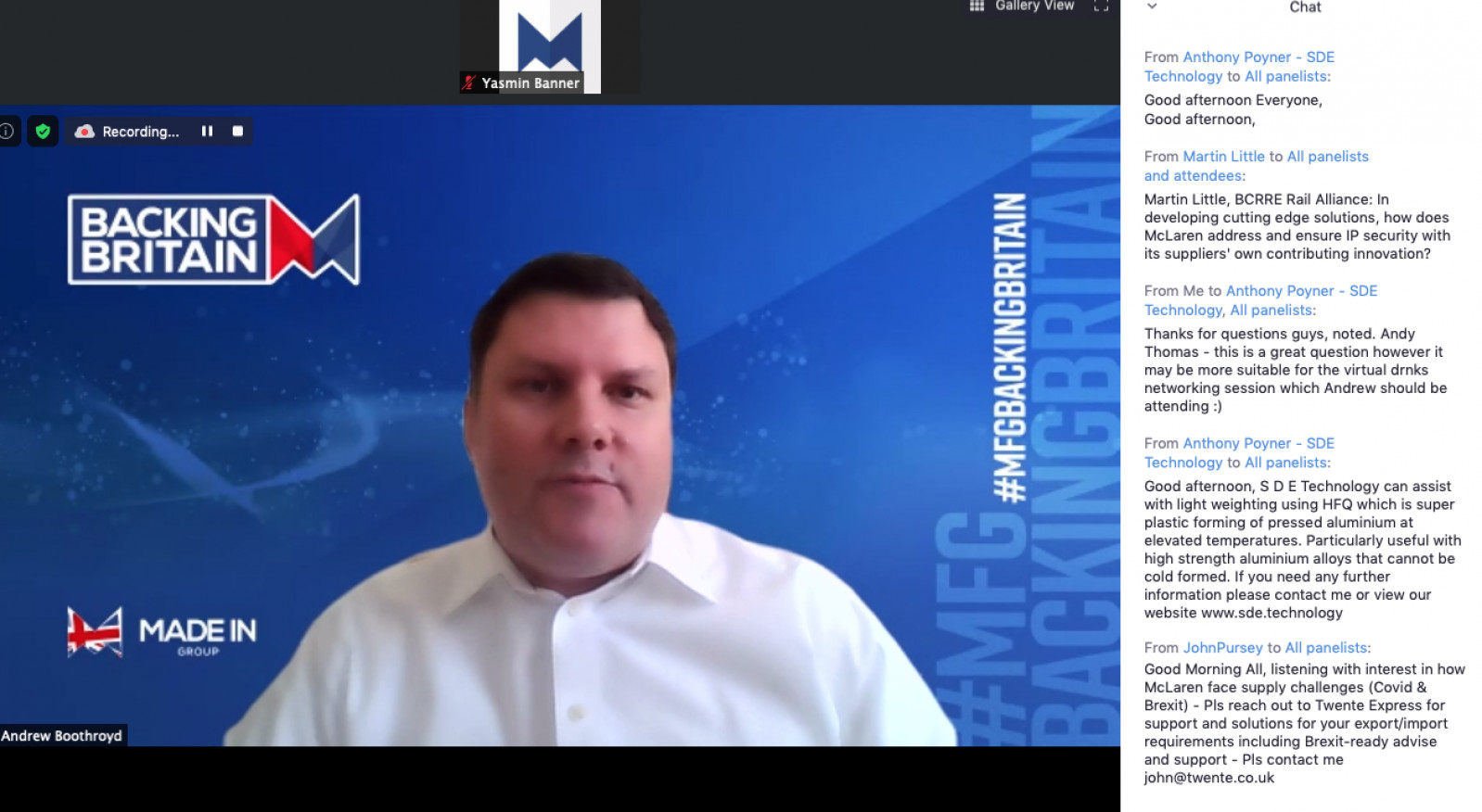 Marking the fourth major event at the Backing Britain Live exhibition, Andrew Boothroyd, Head of Logistics Engineering and Future Solutions at Mclaren Automotive, took to the virtual stage as a keynote speaker. Andrew’s speech focused on their work for the central ventilator challenge, the help of a local midlands manufacturer for the latest Mclaren supercar and their work with MIM member Boneham and Turner.

The keynote speech highlighted how the car brand giant Mclaren F1 backs Britain. With a manufacturing plant based in Chertsey, Woking not only do they work with local Midlands manufacturers but they also help develop and nurture STEM students to become leading engineers in the luxury car industry.

Andrew and his team at Mclaren Automotive are responsible for “the processes and equipment required to transport parts and components from their supply base to the operators working on the production line.”

He then pointed out that he will be sharing his experience of 2020 and the manufacturing SMEs the firms they have had “the pleasure of working with”. He later mentioned that they have just opened a new composite technology centre in Rotherham, Yorkshire.

In January 2020, the team were working on the latest Mclaren supercar commonly known as the ‘Speed Tail”. After some testing, it was confirmed that the Speed Tail runs at 250 miles per hour. In the popular Amazon Television show “Top Gear”, the supercar was put to the test against an F35 lightning ii fighter jet. You can watch this here.

“Acres are a Tier 1 supplier to Mclaren, but beyond that, they are a partner to our ongoing development and success.”

“Together we have created modular solutions that reduce the risk of damage, help to eliminate waste and designs that make them more sustainable and cost-effective.

Mclaren worked on a number of projects as part of the UK ventilator challenge, including the design and manufacture of a trolley to carry and transport the penlon device in intensive units.

It was then mentioned that over 20 midlands manufacturers and engineers also stepped up to the ventilator challenge, Andrew continued: “they really did go above and beyond to support the cause.” The example he used was MIM member Boneham and Turner, who worked day and night to get the ventilator components assembled.

You can watch the full keynote speech from Andrew by clicking this link - https://www.youtube.com/watch?v=daOq_sD05fw&feature=youtu.be. Catch tomorrow’s keynote speech with DR Andy Palmer, Chairman of Optare and former CEO of Aston Martin. Head to backingbritain.com at 12 pm to join.